When John Wilson bought the land on which Perrycroft was to be built in 1893 it amounted to some 80 acres on the west side of the Malvern Hills above the village of Colwall.  It is likely that Voysey was instrumental in choosing the exact site for the house and its surrounding garden, as the focus of the whole estate is the spectacular Herefordshire Beacon, otherwise known as British Camp, an Iron Age hill fort and striking local landmark.  Perrycroft enjoys an unique view of the Camp, looking south on to its most romantic and distinctive profile.

Although Voysey took inspiration from nature in his designs, particularly in his textile and wallpaper patterns, he was not known as a designer of gardens.  Many of his watercolours show a simple almost childlike depiction of a garden around the house, with stylised flowers out of season with each other suggesting he was not a horticulturalist himself.  Nor was he known to work with a particular gardener, although Gertrude Jekyll did later provide planting for his garden at New Place, Haslemere (1897).  However, it was very important that the house harmonised with its surroundings, and his houses were designed to blend seamlessly with the garden.  Benches are positioned against the house to take in the vistas at different times of day, and the house itself is provided with vine eyes for climbers and wall shrubs so as to grow the house in to its setting. 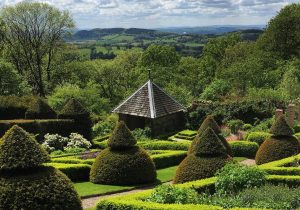 Two detailed drawings exist for the garden at Perrycroft, one for a section of the walled garden and the other for the Summer House, both positioned to the west of the house at the bottom of a square sloping garden which is enclosed on two sides by tall yew hedges and on the other two by sturdy Malvern stone walls.  Beyond this enclosed garden a Voysey designed gate and pergola lead to an oak woodland.  Standing at the top of this small formal garden beautiful far reaching views can be enjoyed across Herefordshire and on a good day into Wales.   There are no planting plans for this part of the garden, and except for the yew hedges no original plants remain, but this has now been planted as befits an Arts and Crafts garden, with box hedges, yew topiary and cottage garden plants.

Below the house and spreading beyond the formal garden is the wild garden, displaying very much the influence of William Robinson.  Here are grass walks between mature trees and shrubs, with meadows, ponds and woodland.   William Robinson’s “The Wild Garden” published in 1870, and reissued several times with author’s amendments including in 1895, would have been an enormous influence on owners of small country estates such as Perrycroft.  Here he propounds his theories of working with rather than battling against nature, very much in keeping with Voysey’s ideals of harmony with the surrounding natural world, and striking a chord in gardens today.  Great swathes of Spring bulbs followed by an abundance of wild flowers are complemented by long established Robinsonian plantings such as stands of bamboos, naturalised giant perennials Fallopia sachalinensis and Filipendula camtschatica, bog plants including Darmera peltata and Lysichiton americanus, and venerable shrubs such as Rhododendron, Deutzia and Philadelphus.  Sheltering the wild garden are majestic mature trees, including oak and beech, and exotic Wellingtonia, Sequoia and Tsuga. 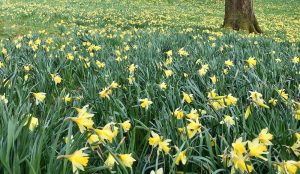